Event Loop is what allows Node.js to perform non-blocking I/O operations — despite the fact that JavaScript is single-threaded — by offloading operations to the system kernel whenever possible.

Since most modern kernels are multi-threaded, they can handle multiple operations executing in the background. When one of these operations completes, the kernel tells Node.js so that the appropriate callback will eventually be executed.

Can you guess what will be the output of the below code snippet? If yes; congratulations, you understand Event Loop completely. If not; I would request you to read and understand details of each phase and then try to figure out the output.

The Event Loop is composed of six phases, which are repeated for as long as the application still has code that needs to be executed: 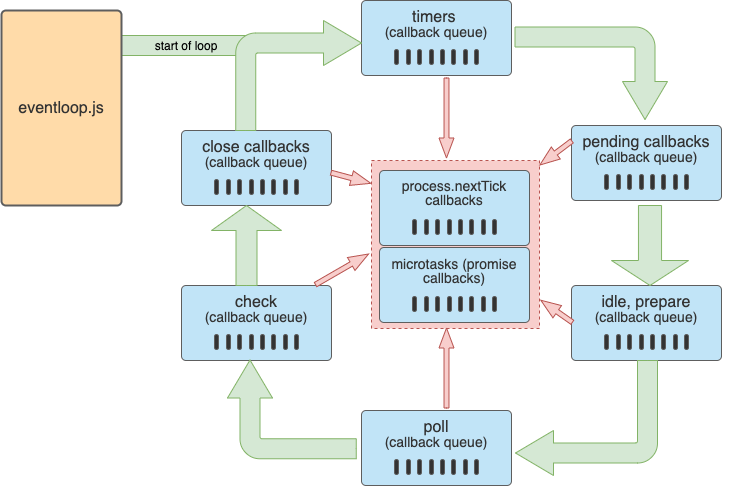 The six phases of event loop creates one cycle, or loop, which is known as a tick. A Node.js process exits when there is no more pending work in the Event Loop, or when process.exit() is called manually.

This queue is broken down into two queues:

Let us try to understand the code snippet

The main thread will execute the code in index.js synchronously. It will add callbacks to their respective queues as and when encountered. Initial output

Next callbacks were registered by process.nextTick() and promise and hence they will be executed.

Event loop will then enter the timer phase and executes the callbacks which have expired. Also, during execution of callback registered by first setTimeout(); process.nextTick() registers a callback to microtask queue. Hence, it will be processed after the current operation is completed, regardless of the current phase of the event loop.

setInterval() also registers a callback during the timer phase and is called repeatedly at 0ms interval but execution will happen in separate iterations.

The next phase is poll phase but since some time is required to read data from file hence event loop will enter into check phase. Since, there is a callback registered by setImmediate(), it will gets executed.

This completes the first iteration of the loop. In the next iteration, it first enters the timer phase and executes expired timers callbacks.

It then enters the poll phase and will execute callback registered during file reading operation.

In similar manner, further iterations of event loop will continue until there is no code to be executed.

Hence, the output of the above code snippet is

Node.js processes are single threaded and simplifies the complexity that comes with writing multithreaded code. Event Loop helps offloading I/O tasks to the C++ APIs and determines the callback function that would be executed next at every iteration.

I hope you enjoyed reading this and find it helpful. I sincerely request for your feedback. You can follow me on twitter @lifeClicks25.